Chalk Horse Directors and staff are pleased to announce our new address at 8 Lacey Street in Surry Hills, NSW 2010.
The gallery is ready to unveil in tandem with this powerful new body of work by Jasper Knight that drives toward destabilising the rigid boundaries of that which is solid, fixed, strong, and mechanical. Boats are ideal grounds for exploration for Knight, as he can seem to dissolve boats and wharves to reflect their liquid homeland to create a languorous interplay.
In conjunction with the industrial media of enamel, masonite, Perspex and vintage signage assemblage a distinct reinterpretation of constructivism is thrust to the viewer with clear post-pop intentions; merging the paintings from a two dimensional plane to reveal a constructed object darting between the material and the subject.

Knight reveals stunning selection of water vessels in their built-for roles cruising some of Australia's greatest harbours. Powerful and impressive water vehichles from The Endeavour Replica (1988) pictured above as well as the Packers' 88 metre converted ice-breaker are juxtaposed with quaint vistas of small tug-boats as well as early built harbour scenes like Port Albert in Victoria.
Jasper Knight is Sydney-based and one of Australia's most successful young artists. He has shown internationally; in London, Antwerp, Singapore and Hong Kong and is represented across Australia and in the UK. He has won a number of significant awards including from the Helen Lempriere Scholarship and has been a regular finalist in national awards including the Archibald and Wynne Prizes. This year in 2011 Knight is a finalist in the Wynne Prize with King Street Wharf currently on show a the Art Gallery of New South Wales.
Posted by Chalk Horse Blog at 6:09 PM 1 comment:

Chalk Horse has a new home!

We are now located at  8 Lacey Street in Surry Hills
The next exhibition is:
Jasper Knight 'Sydney Boat Show'
Opening Thursday 5th May 2011


Chalk Horse Directors and staff are pleased to announce our new address. The gallery is currently in the final stages of construction and will be ready to unveil in tandem with a powerful new body of work by Jasper Knight featuring a stunning selection of water vessels in their built-for roles cruising some of Australia's greatest harbours. 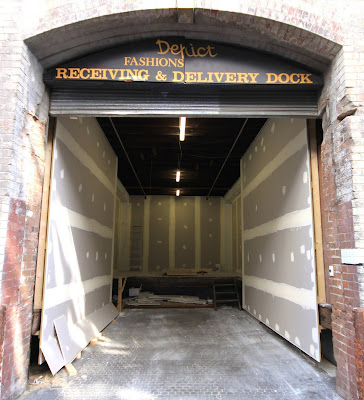 We look forward to seeing you there to share in celebrating our new premises.
Posted by Chalk Horse Blog at 5:55 PM No comments: 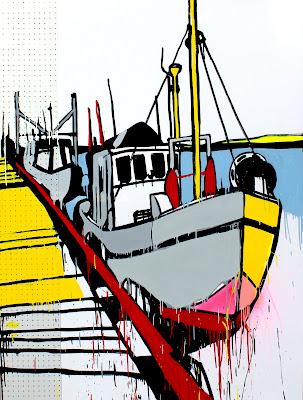 WE ARE MOVING TO NEW PREMISES
FOR MAY 2011

Chalk Horse is excited to announce that we will be moving to new premises this May 2011 and will re-open with a feature exhibition by Jasper Knight entitled Sydney Boat Show.
JASPER KNIGHT
Sydney Boat Show
05 May - 16 June 2011
Opening Thursday 5th May 2011 6-8pm
This new body of work for Knight will feature a great selection of water vessels depicted in their built-for roles cruising around one of the best harbour cities in the world, Sydney.

For the period of our move we will be closed from Tuesday April 5th through until May 5th. 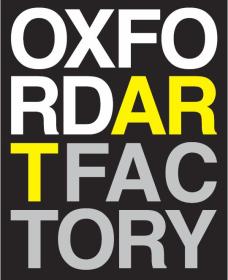 Free Fall is a three month program of live performances by Sydney based contemporary and intermedia artists scheduled to begin every Friday and Saturday night at the Oxford Art Factory cube from April 15.The program has been curated by Sydney video and photomedia artist John A Douglas in partnership with Chalk Horse gallery. Many of the artists selected for the program have been successfully exhibiting both locally and internationally for the last few years and the Oxford Art factory cube offers an opportunity to present live performances of their latest works.
Free Fall is a term used to describe the moment when parachuting from a plane before opening the parachute when you think is this going to work as you free fall through the atmosphere. Free Fall is about artists taking risks outside of the white cube of the gallery and landing in the glass cube of the Oxford Art Factory to deliver contemporary art to an audience in the environment of a bar/nightclub/music venue reaching new audiences and creating new modes of practice.
Each of the Free Fall artists have their own unique aesthetic style and yet a commom thread is to push beyond the boundaries and expectations of what art is and can be. Each weekend the Oxford Art Factory cube will be transformed  into a performance installation and will explore endurance, art history, action, painting, costume, gender shifting, characterizations and pop culture all with a sense of fun and experimentation. 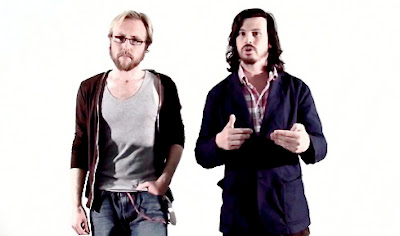 “We will turn the glass cube into a place from which two critics view and judge the scene below. We will be dressed in lounge suits and identically – the colour scheme will be muted. Part scientists, part metaphor of superego guilt, our constant unheard chatter will unsettle the viewers. What do they think? Did we dress well? Are we enjoying ourselves enough? Am I all that? On white boards in the room our scribble will give the audience some idea of our (il)logical response. On the second night we will allow the audience to hear a pre-prepared summary of the night before, we will set parameters of what should follow on this Saturday night, what we expect. The audience will be encouraged to take photographs of the white boards and we will have a printer on call to print off white board grabs. Secretaries and administrative staff will help at various times.”
(A taste of what's to come...)
Free Fall has been curated by Chalk Horse represented photomedia artist John A Douglas.

For further details and artist profiles hit up the Oxford Art Factory site and click the ART tab.
You can also find Free Fall on Facebook
Posted by Chalk Horse Blog at 12:03 AM No comments:

Julian Meagher will be interviewed this Sunday April 10th by Fenella Kernebone airing at 5pm. The show will be repeated on ABC2 at 9.30pm, but failing both of those you can catch the ep post-date by clicking this link 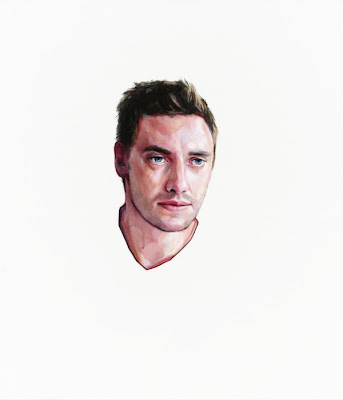 Meagher famously put down his stethoscope and stepped away from practicing medicine to pursue practicing art so it will make for great television...
Tune in for the full scoop.
Image:
Julian Meagher
Self portrait at 15,000 feet 2011
70 x 60 cm
oil on linen
Posted by Chalk Horse Blog at 11:40 PM No comments:

Chalk Horse artists Kate Mitchell and Sannè Mestrom are currently exhibiting bodies of work as a part of an exhibition called Social Sculpture at Anna Schwartz curated by Charlotte Day. The exhibition runs from 02 April through until 18 June and is thoroughly worthwhile checking out as it has been heralded "the most dynamic use of the space ever" through our own eavesdropping on the evening of the opening. Check out the details below... 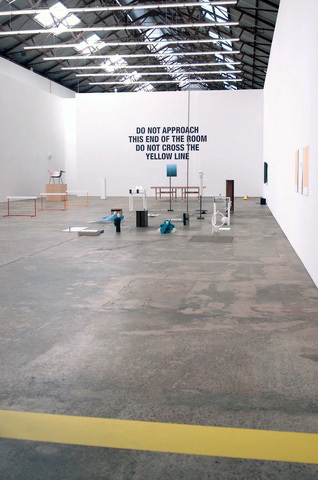 Turning the gallery inside out was the starting point for Social Sculpture, to open up the gallery to a range of temporal and process-oriented practices. This emptying out provided the opportunity to think about the gallery’s physical space in particular ways. It allowed a consideration of its literal and metaphorical weight, how artworks are situated within it, the space between the works and the pedestals and supports for works, and the way in which artists and visitors inhabit and interact in such spaces.
Social sculpture is a loaded term with its historical connection to the work of the German conceptual artist Joseph Beuys. He wanted to describe the expansion of art beyond previously existing definitions and its capacity as an agent of change in the world. In the contemporary context, Social sculpture is less politically idealistic but the term remains, importantly, an heroic endeavour. Social sculpture relates the expanded field of sculpture – here incorporating installation, video, and actions – to people, and people to sculpture. It is about the embodied art experience – both the artist/performer’s and the viewer’s.
… 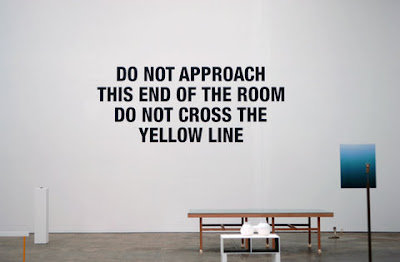 Invisible forces are the focus of SANNÉ MESTROM sculptural installations – in this instance, the bare weight of the gallery space.  Mestrom’s group of sculptures, made from found, constructed and cast elements, each weighs 6.5 kilograms, and is equivalent to the weight of air in the space it occupies in the gallery. Although the individual assemblages are therefore related in this fundamental way, they vary substantially in scale and substance. Mestrom draws attention to the inherent properties of materials (such as bronze, marble and wool) as well as to the processes of fabrication that bring an object into being; she mixes up original with casts and copies, and solid and transparent forms with those veneered. There is a playfulness at work in the activity of measuring up. To achieve the correct weight, a portion of a face is removed from a mannequin, small counterweights of copper and lead are added to another, and drawers are removed from furniture. In Compression Chamber (2011), the immaterial cultural and philosophical weightiness of objects and an understanding of the specificity of their context, is also made manifest: an archive box of PhD research files reminds us of the embedded research; a warm jumper is wrapped protectively around a garden-variety gargoyle, usually exposed to the elements; and preciousness is reinstated by casting in bronze a $2 shop Buddha.  … 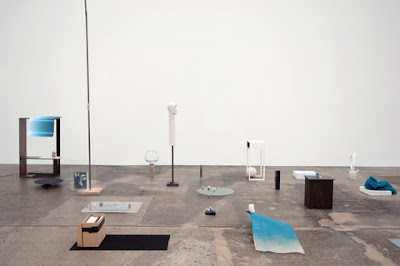 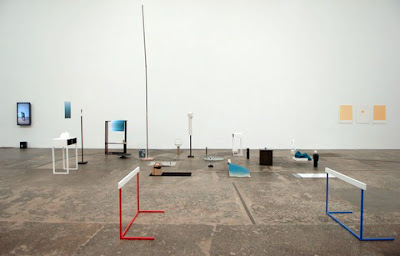 For KATE MITCHELL, the idea of art as work and the artist as both manager and worker is fundamental. In a series of video re-enactments of classic comic situations she has been making since 2006, Mitchell dons standard work clothes and boots (much like Beuys) to perform planned actions that often involve a degree of precariousness, risk and danger. In A Situation (2011) shows her poised on a plank protruding from a dairy shed in an idyllic country setting. Mitchell proceeds to saw through the plank and after a protracted period of time, but actually only a six-minute single-take, the anticipated and unavoidable happens. As she falls to the ground, she rolls over, gets up and calmly walks away. The work is funny but unsettling, in the manner of Funniest Home Videos. We laugh guiltily. 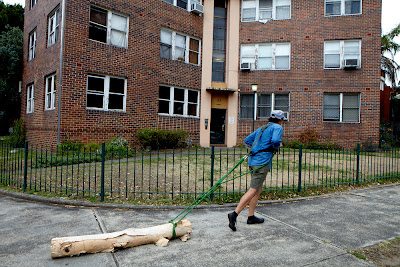 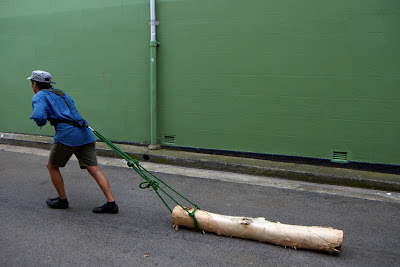 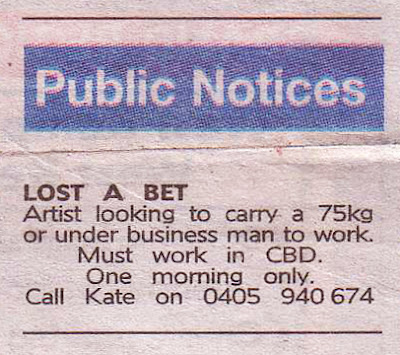 In Lost A Bet (2011) Mitchell offers to piggyback a businessman from his home to his office in her bid to provide a tangible service. The more awkward and difficult the task becomes the more aware we are of her commitment to the action and her unfailing work ethic. One of her most significant endurance works, she describes it as a covert justification for conceptual art: ‘Hey, I lost the Bet!’. This is an understatement that nonetheless is consistent with the humorous and often self-effacing nature of Mitchell’s work, but the effort to prove herself brave, strong, capable and hard working is genuine. Every new work is an additional test of her abilities and attempt to legitimise her art work, nowhere more evident than in the heavy log Mitchell has dragged across Sydney and left as a calling card in the gallery, its underside worn away by the impact of the extraordinary journey.
- Charlotte Day, 2011 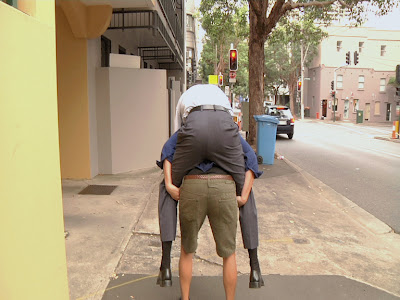 Posted by Chalk Horse Blog at 11:16 PM No comments: